How to Get Hired When You’re A Senior Past 60

Published by Sue Montgomery on December 2, 2017

Where Do I Start as a Senior? 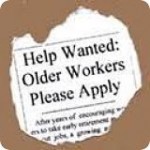 I got a call from Tom whose company was closing in a few weeks, most of the people had already been let go, and he was only being kept around to finish up some projects before the doors shut for good. At 63, Tom  didn’t have a clue about how or where he was going to find a new job.

Think About What and Who You Know

Tom’s career had been spent in construction, all 40-plus years of it. That’s what he knew and that’s where he wanted to stay. Had no interest in learning a new trade.  I asked Tom was if he could retire early. His answer was no. He didn’t have the money to retire.

I told Tom to think about people he knew who might give him leads to jobs. Suppliers he bought from. Inspectors he’d talked to. Companies his employer competed with. Subcontractors and job superintendents he had worked with. Anyone who might know someone who knew someone who needed a good construction manager.

Tom started talking to everyone and began to get leads on jobs. He followed them all. He didn’t get many interviews but he did get some.

One of those interviews turned into a job offer. It was a job Tom thought he would like and he wanted to take it, but there was a major problem. The new job paid $20,000 a year less than he was making and Tom didn’t know if he and his wife could live on the money.

I told Tom that most employers don’t make their best offers first. He might be able to negotiate more money or an earlier evaluation (be reviewed in 30 instead of 90 days with the possibility of a raise). I suggested that he and his wife crunch some numbers. See what they could actually live on rather than what they wanted to live on.

Tom negotiated $8,000 a year more to start and a 30-day review with the possibility of another raise. And after looking at their expenses, Tom and his wife decided they could cut back. It would be tight, but they could live on less. He accepted the job.